So after hot summer weeks and weekends working camps in outdoor adventure at the Boy Scouts of America, Alamo Area Council (as the Chief Storyteller of the local BSA, I was capturing videos and photo stories of Scout youth at Bear Creek Scout Reservation and McGimsey Scout Park), I find myself on Monday, July 23, 2019, at the Jim’s Restaurant off 1604 and Nacogdoches in North East San Antonio at 5:30 a.m. in the morning.

I am about to dig into a gravy covered chicken fried steak and eggs. I’ve been up all night.

Well, wanting food is not exactly why I can’t sleep! It’s probably the antibiotics and steroid shots I got in my buttocks at the doctors office earlier. I don’t remember getting dirty lake or pool water in my left ear but it must have happened sometime. It started hurting Saturday and doc says I got a bad infection. Pain sucks but it may have been a nudging from God. I begin writing a screenplay!

Follow me girl (pun intended) back to the weekend before this last where the story kinda started…It was Sunday, July 14th, and I surprised my Hanna high school and actress friend, Marita de la Torre, at Cinefestival 2019 at the Guadalupe Cultural Arts Center in support of the showing of her short film “Plane Pretend” where she appears as the one of the lead adult characters.

Plane Pretend won BEST SHORT Film at CineFestival 2019! It’s about a girl named Pilar and her brothers ecstatic to take their first flight, but they must hide their excitement or risk revealing their undocumented status and being deported!

Here is where it gets better! Growing up in the Rio Grande Valley, I was always an artistic creative with many dreams…one of them was wanting to dance on broadway or in the movies. Part of that reason was watching Jesse Borrego on the TV series FAME! Jesse played Jesse Valesquez, one of the students at New York’s famous High School for the Performing Arts as they pour their hearts and souls into their training to become stars in their chosen field in this TV series adaptation of a 1980 motion picture of the same title. I was eight when the movie came out. The TV show ran from 1982 to 1987.

So, when someone asked me if I wanted to take a photo with Jesse Borrego in front of the selfie event banner, what came out of me was a demanding, “ONLY IF he stands in a DANCE pose with me!!!”

I turn around to find Jesse laughing with one arm over his head and the other extended out by his side ready to oblige me! 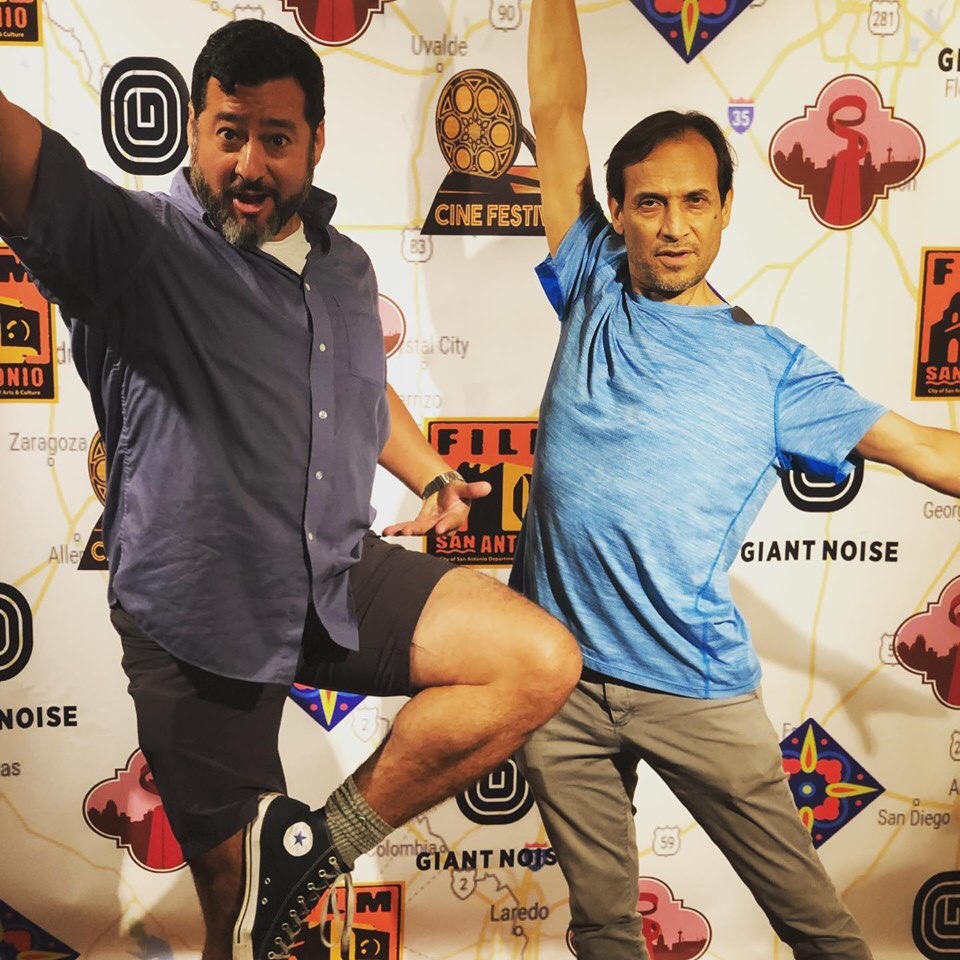 It gets even better!

Jesse, Marita, and I begin sharing our stories and lives up until Jesse interjects when he find out I work for the Boy Scouts of America.

“You know I have a friend that wrote a story about Scouts kinda like ‘Bad News Bears‘ on a Campout gone wrong,” said Jesse.

“I too have written a Boy Scouts film treatment but mine is a rom-com about an inner city San Antonio Latino boy that hustles his way in the heart of a rich white girl by starting his own troop but against the wishes of her disapproving Eagle Scout father,” I quickly replied.

Jesse goes on to explain his friends story never turned into a screenplay and getting Scouts was a problem.

“Can you get extras?” inquires Jesse.

“Over 18,000 Scout youth from Bexar and the 12 surrounding counties and access to 3 Scout camps including a cool zip line managed by the local Council,” I calmly stated.

I see Jesse ponder the possibilities as he smiles. So my past sales training as a sports & entertainment private banker in Nashville kicked in but with a San Antonio twist!

“Let me buy you some tacos and we can sit down and talk about it…and what’s the best contact phone number to reach you?” said I with much enthusiasm.

And, then I pulled out my cell and handed it to Jesse to enter his digits.

And that’s the story of how I brushed off the dust on my Boy Scout film treatment, got my steroid infused body up from bed, and started writing the next best Boy Scout movie ever made – Follow Me Girl!

Note: Quite possibly the only movie ever authorized by the Boy Scouts was directed by Norman Tokar and featured a young Kurt Russell named “Whitey” as a Scout in the Walt Disney produced film, Follow Me Boys!